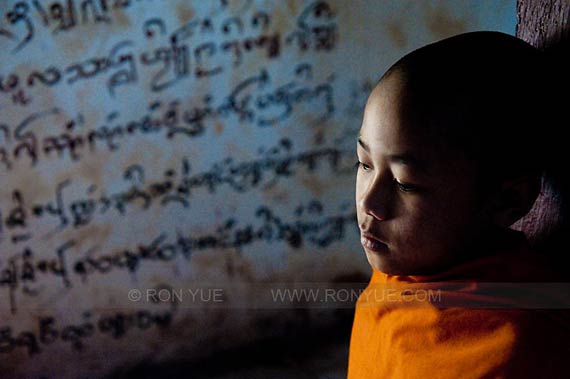 One of the main things I teach customers on my photo tours is how to really see light, all types of light. When they are shown this skill, they are amazed at what they are able to photograph without any flashes at all, and they start looking for opportunities in situations that they would have previously passed up altogether.

Last year on a photo trip in Yunnan’s deep south, near the border with Burma, our group was visiting a tiny monastery secluded up a forested hill beyond a tea plantation. Most of the customers began photographing outside, since the dim interior, initially, did not look like it yielded many photo options.

I brought several of the customers inside and pointed out a north facing window, that allowed for subdued lighting to permeate the room, where there were a few young monks milling about. When learning how to manage light, the brightness of the overall scene is much less important than the brightness of the various subjects in the scene in relation to each other.

One of the monks was willing to act as the subject for our photos. I had him to stand about two meters from the window where the light intensity falling on him would be at a level so as to render the wall behind with the Tibetan writing on it to be slightly subdued. Though the wall was probably two stops darker relative to the light on the monk, since it was white, I knew that the black writing would still be visible in the final exposure. Had he stood closer to the window, the light on him would be too strong and the wall would have gone completely black. If he was too far from the window, the light intensity on him would have been too similar to the wall and the writing would have appeared too bright. I also had the boy stand at an angle where the light would catch just enough of his left eye to further create a more subdued feel to the photo.

There you have it. A nice composition with relatively soft light on the subject with a slightly dim room behind, but just enough light there to give a sense of place to the photo – all achievable with a simple lightweight camera and lens. No strobes used at all!

This entry was posted in Feature Photos, Photography Tips, Tales from the field. Bookmark the permalink.