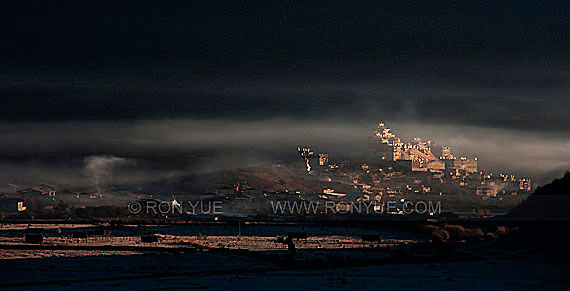 In James Hilton’s distinguished 1933 novel, The Lost Horizon, the fabled heaven of Shangri-La somewhere in the Kunlun Mountains is depicted as a utopia of sorts, isolated from the rest of the world, where life is perfectly harmonious. This expression is now regularly used to describe any sort of paradise on earth. It was therefore an obvious marketing strategy when the Chinese renamed the Tibetan town of Zhongdian in northwest Yunnan to Shangri-La back in 2001.

I first set foot in Shangri-La back in 2005 on a research trip, having come from Sichuan directly to the north. I have since returned a number of times on photography tours with customers. On a recent trip at the beginning of November, our group was photographing the Ganden Sumtseling Monastery in the early morning from the opposite side of the nearby lake. It was the first time I had been in this area so late in the year and the fog from the cold morning air moving across the lake combining with smoke from the stoves of the surrounding Tibetan homes produced some interesting cloud-like bands in the area. I thought about photographing the monastery from a further distance with a telephoto lens to help compress these white bands and make them more prominent.

At dawn the following day, we drove several kilometers away to a spot where we had a clear view of the monastery from across some fields and waited for the sun to rise. This photograph was taken moments after the first rays of light lit up the monastery a golden tone. The southwest direction that the hills behind were facing allowed them to stay in shadow in the morning, and therefore they appear black in the image. This gave incredible contrast to the photograph and allowed the fog and smoke to stand out.

This entry was posted in Feature Photos, Inspiration, Photo Tours, Photography Tips, Tales from the field, Travel. Bookmark the permalink.