Tip: A useful exercise to improve your composition

Want to improve your composition? Attach a wide-angle lens to your camera, something around 24mm, and go around for a few hours and photograph using only this lens. If it is a zoom lens, don’t change the focal length. For those with cropped frame cameras, you can set your focal length to around 16mm.

Wide angle lenses can capture so much in the frame that it really forces you to move around in order to simplify the scene and eliminate all those extraneous details. These lenses also have more depth of field so it is more difficult to blur out backgrounds behind your subject compared with what telephotos can do, so selecting foreground and background objects becomes even more important. You won’t have the flexibility of a zoom lens, so you’ll probably find yourself having to work very closely to your subjects or looking for simpler scenes than you would expect to.

When you download the photos to your computer, look at every frame closely. You may be surprised that in some photos there are many distracting things around, especially in the background, which you did not notice at the time you were taking the picture.

Do this exercise a few times, and your composition skills should increase a few levels.

The two photos below were photographed at Shi Shi Beach in the pristine wilderness of the Olympic Peninsula in Washington State, USA. Both were taken with wide-angle lenses. The first one was a snapshot in harsh midday light from normal standing height. The second one was shot at dusk. I worked the scene to simplify it and provide a nice foreground to background balance, and took it from a low angle to give the foreground more prominence. If you look closely at the first photo, you can see roughly where I needed to be for taking the second shot. 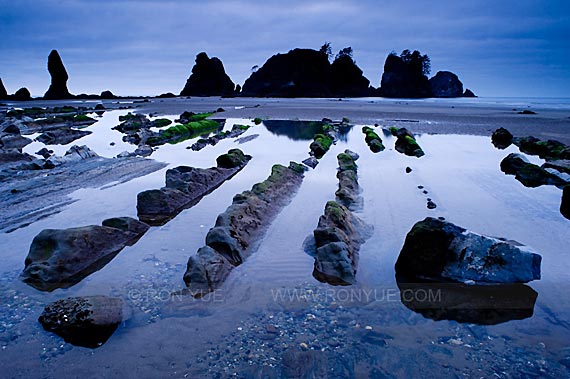 This entry was posted in Photography Tips. Bookmark the permalink.

One Response to Tip: A useful exercise to improve your composition